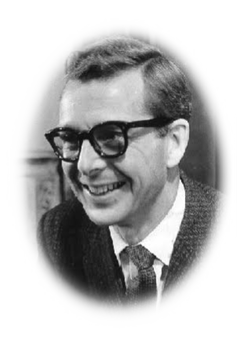 Guy Vaesen and the founding of “The Florians”

Guy Vaesen was the driving force behind the establishment of the club primarily to entertain the troops, in 1944. Guy was an extremely interesting character who became a close friend and mentor of Harold Pinter. Guy was from London and joined the Royal Tank Corps during the war, but being unfit for overseas service, was sent by the military to inspect NAAFIs in the North of Scotland. Guy put his time in Inverness to good use by forming the club and writing and directing its first production in 1944. This was “The Road that Beckons,” and Guy also directed the next three productions including “Time and the Conways” by J B Priestley. Unfortunately no copy of the play exists, although a review in the “Inverness Courier” indicates that it was a work speculating on what fate awaited society after the war.

Guy’s obituary from “The Independent” in 2002 speaks at length about his career in the theatre and his friendship with Harold Pinter and wife Vivien Merchant. However, the most amazing part of the obituary states that when in the Highlands during the war he had: “…formed a group of amateur players, the Florians…” This statement indicates that Guy had deemed the formation of the club important enough to him for people to have remembered it and included it in his obituary.

The obituary had many interesting facts about Guy’s career which had taken him from a post-war lowly stage hand in the Theatre Royal Stratford, to Birmingham Rep, Great Yarmouth, Lowestoft and Scarborough. From 1957 to 1963 Guy had been resident director at the Connaught Theatre in Worthing, and his close friendship with the Pinters had led to them moving house there in 1962. Harold wrote “The Homecoming” at the house in Ambrose Place, Worthing and Peter Hall was to regard this as Pinter’s finest work. Guy also worked for the BBC for a number of years and eventually became Head of Drama at Radio 3.

Guy’s early years at the Corporation proved rather soul-destroying. The job of BBC script editor could be a mind numbing existence and having to shatter aspiring authors’ dreams on a daily basis by returning rejected scripts to them; he eventually sought solace from this by joining the BBC Arts Society. This proved to be a life changing decision and led to Guy’s final career as an artist. Guy’s work was to hang in some very illustrious homes such as those of Lady Antonia Fraser, Paul Eddington, Judi Dench, Vincent Price, Coral Browne and of course, Harold Pinter.

Interestingly, the obituary mentioned that Guy had a son named Paul, and after some research we were able to locate Paul for our 75th anniversary. Paul and his wife Daphne readily agreed to be guests of honour at our Open Day in July 2019.