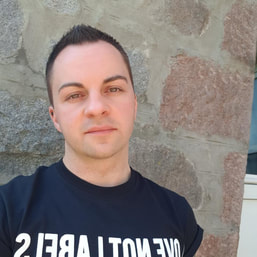 Roy attended Junior Florians whilst at high school - around 20 years ago now. At the time it was just a hobby and not something he intended to pursue as a career. Cut to present day - since then Roy has trained at a performing arts college for 3 years, completed dance teaching qualifications with the Imperial Society of Teachers of Dance, taught dance at numerous dance and theatre schools, choreographed and directed large scale productions and seen many of his pupils go on to train at some of the most prestigious performing arts colleges in the UK. As well as teaching Roy was also involved with the Inverness Pantomime at Eden Court for ten years, firstly as a professional dancer taking the role of dance captain and then progressing to choreographer and latterly to Assistant Director.

Four years ago he decided to take a break which evolved into a career change working in Children’s Social Work at Aberdeen City Council. But a dancer never truly hangs up their shoes! In his spare time Roy is involved with a local theatre group choreographing and performing in shows and pantomimes, although these are strictly for adults! He also teaches dance classes and workshops.

Roy feels he owes a huge amount to the dedicated leaders who gave up so much of their free time for his generation of Junior Flos, inspiring him and giving him opportunities to perform and helping him discover a passion for dance which he didn’t fully realise until years later.

Roy says “I have some wonderful memories of my time in the Junior Florians and I’m proud to say I was a member. Congratulations on 75 years and here’s to many more!”
Florians Drama Club Florians Theatre Bught Drive Inverness